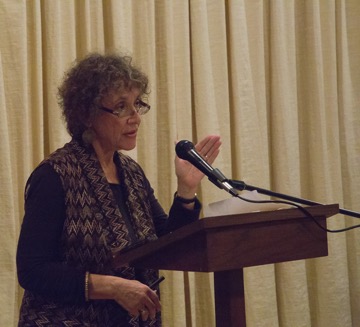 Marjorie Cohn is professor emerita at Thomas Jefferson School of Law where she taught from 1991-2016, a former criminal defense attorney, and past president of the National Lawyers Guild. She lectures, writes, and provides commentary for local, regional, national and international media. Professor Cohn is cohost of Law and Disorder on WBAI radio in New York and heard on 130 stations nationwide and online.

She has served as a news consultant for CBS News and a legal analyst for Court TV, as well as a legal and political commentator on BBC, CNN, MSNBC, Fox News, NPR, and Pacifica Radio.

The author of Cowboy Republic: Six Ways the Bush Gang Has Defied the Law and co-author of Cameras in the Courtroom: Television and the Pursuit of Justice (with David Dow) and Rules of Disengagement: The Politics and Honor of Military Dissent (with Kathleen Gilberd), Professor Cohn is editor of and contributor to The United States and Torture: Interrogation, Incarceration and Abuse, and Drones and Targeted Killing: Legal, Moral, and Geopolitical Issues.

One of her books was cited in a U.S. Supreme Court opinion and her articles have appeared in numerous journals such as Fordham Law Review, Hastings Law Journal, and Virginia Journal of International Law, as well as The National Law Journal, Christian Science Monitor, and Chicago Tribune. Her frequent columns appear on Huffington Post, Truthout, Truthdig, Consortium News, CommonDreams, Counterpunch and ZNet.

She has been a criminal defense attorney at the trial and appellate levels, and was staff counsel to the California Agricultural Labor Relations Board. Professor Cohn is the U.S. representative to the executive committee of the Association of American Jurists, and a member of the bureau of the International Association of Democratic Lawyers.

A veteran of the anti-Vietnam War movement, Professor Cohn received her B.A. from Stanford, where she majored in Social Thought and Institutions, and her J.D. from Santa Clara University School of Law. She testified in 2008 about U.S. government interrogation policy before the House Judiciary Committee’s Subcommittee on the Constitution, Civil Rights and Civil Liberties, and has also testified at military courts-martial about the illegality of the wars, the duty to obey lawful orders, and the duty to disobey unlawful orders.

Professor Cohn sits on the boards of directors of the Vietnam Agent Orange Relief and Responsibility Campaign and Lawyers Rights Watch Canada, the national advisory boards of Veterans for Peace, Assange Defense, and Progressive Democrats of America, and she is a civilian member of the board of GI Voice. She is also a member of the advisory boards of ExposeFacts and the American Constitution Society – San Diego Chapter. Professor Cohn served as a rapporteur for the International Commission of Inquiry on Systemic Racist Police Violence Against People of African Descent in the United States. And she is a member of the Scientific Council of the Cuban Law Journal.

The recipient of the San Diego County Bar Association’s 2005 Service to Legal Education Award, Professor Cohn was recognized as one of San Diego’s Top Attorneys in Academics for 2006, 2008 and 2009, and was given the 2007 Bernard E. Witkin, Esq. Award for Excellence in the Teaching of the Law by the San Diego Law Library Justice Foundation. She received the 2008 Peace Scholar of the Year Award from the Peace and Justice Studies Association, the 2009 Amnesty International-San Diego Digna Ochoa Human Rights Defender Award, and the 2010 Alumni Achievement Award from the Santa Clara University School of Law. In 2010, Professor Cohn debated the legality of the war in Afghanistan at the prestigious Oxford Union. She received the Debra Evenson Venceremos Award from the National Lawyers Guild in 2018.

A legal observer in Iran on behalf of the International Association of Democratic Lawyers in 1978, she has participated in delegations to Cuba, China and Yugoslavia. She lived in Mexico and is fluent in Spanish.